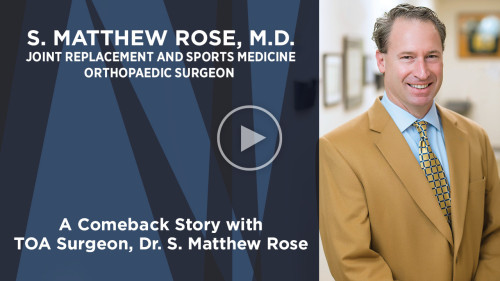 Dr. Rose is a general orthopaedic surgeon at TOA, treating patients of all ages and providing several specific types of musculoskeletal care. He is a Kentucky native and a graduate of the University of Louisville School of Medicine, where he completed his residency. He is also holds a degree in Biomedical Engineering from Vanderbilt University.

He comes to TOA after leading a successful practice in Glasgow, Kentucky, where he served as the football physician to both city and county schools and was instrumental in developing the school system's sports medicine program. While practicing in Glasgow, he held several leadership roles at T.J. Samson Community Hospital including Chief of Surgery, Chief of Staff, and member of the hospital's board of directors. He also established a dedicated program focused on progressive care management for joint replacement patients and served as gratis faculty at the University of Louisville Department of Orthopaedic Surgery.

Dr. Rose enjoys being a true general orthopaedist, performing joint replacements, shoulder surgery, arthroscopy, fracture care, sports medicine, non-operative spine care and hand, foot and ankle care. His work has appeared in many medical journals and publications, and he has delivered lectures on orthopaedics to physicians around the world, including Beijing, China and Montevideo, Uruguay. He has a special interest in performing Anterior Total Hip replacements, a muscle sparing procedure that gets patients walking faster and with less pain.

Dr. Rose is an avid wakeboarder and wakesurfer; in the colder months, he enjoys bow hunting and turkey hunting. He also serves as a team physician for White House High School. Dr. Rose lives in Hendersonville with his wife and three daughters.