At Tennessee Orthopaedic Alliance, our number one priority is our patients. We all take great pride in hearing that our patients are happy with the care we provide. Discover what our patients have to say regarding their office visit, surgical experience or recovery process.

Marla Mabin’s career as a pre-school teacher requires a considerable amount of bending, working on the floor, and moving around to interact with little ones ─ an often difficult task for even the healthiest of adults. But with monstrous back pain looming, these tasks became impossible.

Marla’s severe pain began at work, when she moved a sleeping four-year-old out of the way from several children who were playing nearby. All of a sudden, she heard a loud “pop” from her lower back. Over the next few days, the extent of her injury began to make itself known, as Marla experienced swelling and numbness in her legs, feet, toes, and lower back. The pain grew to be so terrible that she was unable to walk without a cane or some sort of support. She could not even get out of bed or take a shower without assistance. “I was in pain constantly and immobile more often than not.” Ceaseless pain and complete dependency upon others led Marla into a depression, which in combination with her lack of mobility, resulted in her gaining more than 75 pounds.

When Marla decided “enough was enough,” she turned to Dr. Gray Stahlman of Tennessee Orthopedic Alliance to reclaim the life she deserved. Dr. Stahlman removed half the disc that was causing a bilateral impingement, and the results were immediate. With her mobility and balance back, Marla says she finally was able to regain her independence. The effects went beyond allowing her to move again; Marla could do all the things she enjoyed, like camping, hiking, and working out. After her operation, Marla lost more than 90 pounds, and at 40 years old, is now in the best shape of her life. Today, she is training for her first women’s figure skating competition, a feat that would have been unthinkable before her procedure.

Marla describes her experience with Tennessee Orthopedic Alliance as amazing, and she appreciates the warm care she received from Dr. Stahlman. “From the moment we met, he immediately set me and my husband at ease with his comforting smile and his smooth, educational approach. The actual surgery and recovery were much easier than I’d anticipated, and he was there each step of the way.” Before her operation, incessant back pain forced Marla to surrender control of her life, but Dr. Stahlman showed Marla and her family hope ─ that pain could be lifted, that mobility could be restored, and that life could continue in its fullest form. 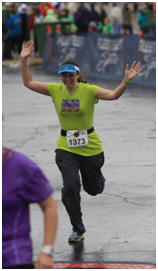 Just one year after being released to run after an ACL reconstruction and recovery, here I am crossing the finish line of a full, 26.2 mile marathon.

Here's to another successful surgery in your medical records! Thanks so much!!!

Lindsey Harrison has just taken off that graduation cap and has big plans in becoming a Registered Nurse in Surgery. She has a loving family of her parents, Kenny and Christa and an older sister Shelby, brother-in-law Richard and little sister Destiny. She is now working part-time as a teller at Citizens Bank of Lafayette. But Lindsey’s life took a turn in January of 2009 during her yearly check-up with her pediatrician where she was diagnosed with scoliosis. After the diagnosis she saw a specialist who had her on a night time brace for 18 months. This brace did not fix her back problem, but to help stabilize her spine from worsening. During the summer of 2011 Lindsey noticed changes in her body such as her hips protruding out, shoulder blade raising up and back pain. She then sought Dr. Christofersen at TOA for a second opinion on her back. “When I talked with him, I knew that surgery was the only way to fix the problem. After careful consideration and many prayers, I agreed to have the surgery.” Lindsey scheduled her hopeful surgery in December 2011 during her Christmas break from school.

Lindsey has bravely had a scoliosis surgery with 11 spinal fusions. “Words cannot begin to describe the amount of pain I experienced from the moment I woke up from surgery. Although it would’ve been easier to stay in bed, I was determined to get over it and not let it keep me down.” Dr. Christofersen set daily goals for Lindsey and she not only met them but far exceeded them. “The day after, I was only asked to stand but I walked across my room to the door and even down the hall. Three days later I was walking without using my walker for assistance. I was released from the hospital earlier (3 nights compared to an estimated week minimum) than I was originally told because of my progress.” Lindsey continued to build her strength at home for a few weeks before arriving to school on time to start the spring semester with her friends. She only missed one day of school for a doctor’s appointment and continued to make all A’s that semester.

Although the surgery was tough, Lindsey says if she knew what she knew now, she would choose the surgery all over again. Her old concern of how her back would progress over the years is long gone. “I no longer have that worry because I know it is fixed and that the fusions have healed correctly. I have also gained back self-confidence that I had lost to the changes in my back. I have no restrictions on what I can do.” Her strength and assurance is shown in her advice to any future patient, “Don’t get discouraged; stay determined to conquer this obstacle and don’t settle for less. Most importantly, never forget where your help comes from.”